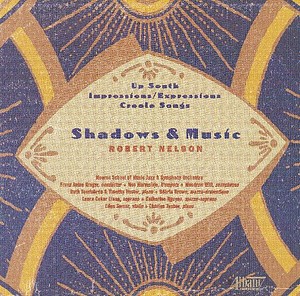 A pupil of Ingolf Dahl and Halsey Stevens, Nelson here reveals another side to his personality. Up South, suggested by both Krager and Marmolejo of the Moores School, reveals Nelson's affinity for both classical and jazz. The work is a veritable history of jazz, with each movement reflecting, respectively, the roots of jazz in the spirituals of the Old South, the Harlem Renaissance of the 1930s, and the emergence of jazz-fusion in the 1960s. The jazz spirit also imbues the duo-piano piece Impressions/Expressions. A more overtly pop sound runs through the arrangements for voice and orchestra of Creole Songs, and the final work, Shadows and Music, applies the story of the famed acting sisters Dorothy and Lillian Gish to the changes music went through during their heydays. This is a highly revealing look at a composer who came of age during the 1960s and 1970s.