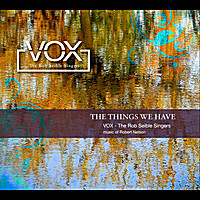 Rob Seible and I were meeting over breakfast as we often do to discuss some project or another. During this particular meeting, Rob mentioned that he was thinking of forming a new group with some of his singer “friends.” I was enthused because I immediately saw the great potential for this ensemble. I have known Rob since he came to work at the High School for the Performing and Visual Arts and have always been impressed with the eclectic range of his interests and abilities. As conductor of the HSPVA Concert Chorale and Madrigal Singers he has performed the gamut of the traditional choral repertoire, but he always expanded his programming to include a significant amount of both serious contemporary music and popular music from all eras. He also brings extensive experience working as a coach and conductor in musical theatre, most notably with Masquerade Theatre and the Gilbert and Sullivan Society. I knew that his new professional group would reflect this same range of interests and I knew I wanted to be involved. It was my dream that VOX would be an ensemble of highly trained and dedicated professional singers that would explore and perform neglected works from the standard literature, premiere new works, and include in their repertoire outstanding works from musical theatre and popular standards. My wishes have been more than fulfilled. Their concerts have been remarkably varied. VOX has developed into an outstanding virtuoso ensemble capable of performing the most difficult music with apparent ease and abundant brio.

It has been my great pleasure to have had the opportunity of creating much of the music for the first three seasons. This has included new works, such as A Year’s Quiet Journey; adaptations, as in A Quilter Sampler; and arrangements, as in the Oldtime Train Songs. The extraordinary abilities of the singers have allowed me an unprecedented freedom to extend my own technique, knowing full well that the singers would be willing and able to realize my conceptions. For a composer, this is the greatest luxury.

This CD provides, I think, a superb overview of the talents and range of these singers and will also provide a good introduction to the group for new audiences. This is a remarkable group, one destined for positive critical notice and a worldwide reputation. Enjoy!
Notes on the Music

The Things We Have
Being of sturdy Swedish stock, I was raised in the Lutheran Church. My father always held the somewhat heretical belief that in the pantheon of the Church there was the Father, the Son, the Holy Ghost, and J.S. Bach. I definitely inherited this belief; my admiration for old Bach borders on idolatry. So when my longtime colleague at the Moores School of Music and then musical director of the Bach Society, Robert Lynn, asked me to compose a new work for the Bach Choir I eagerly agreed, seeing this as the perfect opportunity to pay homage to Bach and the techniques of his great cantatas.

In our early discussions of what the piece should be, we agreed that it might be appropriate to focus the work on some calamity. The disastrous flooding from Tropical Storm Allison was fresh in our minds and we thought that might be a workable topic. Then came the events of September 11, 2001, and we knew immediately that this would become the theme of the cantata. One of the most significant aspects of Bach’s choral works is the use of well-known chorales. Accordingly, I decided that I needed a chorale tune for my cantata and I chose Martin Luther’s Erhalt Uns, Herr. Bob Lynn approached Patricia Clark to write a new original text for Luther’s tune.
My next task was to find some biblical texts that would form the core of the cantata. For this, I went to Rev. Robert Moore, the pastor at Christ the King Lutheran Church in Houston. Pastor Moore’s suggestions were spot on, significantly all Old Testament. The text of the first movement comes from Lamentations 1:1-2, Psalm 52:1-3, Psalm 55:9-10. The text of the third movement comes from Psalm 46. I wanted texts that would express despair and contrast them with texts that would express hope. Pat Clark’s chorale text expresses both. The chorale tune is introduced in the first movement somewhat as a voice “crying in the wilderness” but then becomes more and more central to the cantata.

References to Baroque techniques occur throughout the cantata. For example, the first movement begins as a passacaglia over a chromatically descending bass. The second movement is a traditional chorale prelude. The last movement is a simple setting of the Luther chorale with orchestral interludes.

A Quilter Sampler
I was familiar with many of Quilter’s songs from my experience as an accompanist, but it was Rob’s idea to rethink them as choral pieces. Now, having transcribed this set, I find it hard to hear them in any other way. Roger Quilter (1877-1953) was a British pianist and composer grounded in the music of the Romantic Era and traditional English song. He is a good example of a composer who assimilated a number of 20th century techniques without losing his connection to the richness of his English heritage. He was particularly fond of setting Shakespeare. The pieces in this set demonstrate the range of his expression and also show the virtuosity of his piano writing.

A Year’s Quiet Journey
Years ago I had the great pleasure of collaborating with Lynda Boltz (then Lynda Seible) on a new composition for the HSPVA Madrigal Ensemble. We decided on texts that would explore the adolescent experience while connecting to the rich tradition of the madrigal. Since that time, Lynda has supplied me with numerous poems and I have been hard pressed to set all of them. They are all uncommonly rich in imagery and imagination. I first wrote the music for “A Summer Song” and “Quiet Snow.” I was not happy with “A Summer Song” and so the music went on the shelf. When VOX was formed, I saw the perfect opportunity to revisit these songs. Wanting something of a larger dimension, I went back to Lynda and requested some additional texts. The result was the collection of poems that comprise A Year’s Quiet Journey. I was able to utilize both the wonderful choral sound of the ensemble and the uniqueness of the group’s many solo voices, which I use in small ensembles that contrast with the full ensemble. As befitting the texts, the music is quite often stark and dissonant, at other times joyous and celebratory.

Oldtime Train Songs
One of Rob’s many positions was a stint as director of the Bay Area Chorus. During his tenure the repertoire was typically eclectic, and so one year he asked me to do some arrangements for the group. We considered a number of possibilities such as folksong settings but eventually settled on songs having to do with trains. Well, as it turned out my arrangements just didn’t work, and so, with many apologies to Rob, I put these arrangements on the shelf. Then, for his second season Rob decided to do a concert in collaboration with the Project Divisi strings and featuring Ron Raines. The orchestra would largely be accompanying Ron Raines’ set and would do one selection alone. Rob wanted something that would feature both VOX and the strings. “Aha!” I thought. This is the perfect solution to the problem with the train songs and so off the shelf they came. I reworked several as a medley that could use traditional old time fiddling. I chose “The Wabash Cannonball,” “The Orange Blossom Special” (featuring the violins of course) and “The Rock Island Line.” I added arrangements of Harry Warren’s “On the Atchison, Topeka, and the Santa Fe” and “The City of New Orleans.” I remember the first choral rehearsal that I attended. The singers were doing “The Wabash Cannonball” with their usual elegant refined sound. I hesitantly approached Rob and asked if the singers might do this piece using more of an Appalachian sound. Rob agreed and instantly the sound of the chorus was transformed and I was transported to the hills. This is a truly remarkable group! “The Rock Island Line” ends with an awesome high C-sharp in the sopranos.

Showbiz is My Life
Rob got this tune from a friend of his in LA. It is written in the style of Randy Newman and the text resonates with all of us who have struggled to make a go of it in the performing arts. I wanted my arrangement to feature a number of soloists along with the full ensemble. The piece is in a pop-jazz studio style and is a real tour de force for the singers.

This project has been a once-in-a-lifetime experience for me and I will be forever grateful to Rob and to the VOX singers for such wonderful performances.